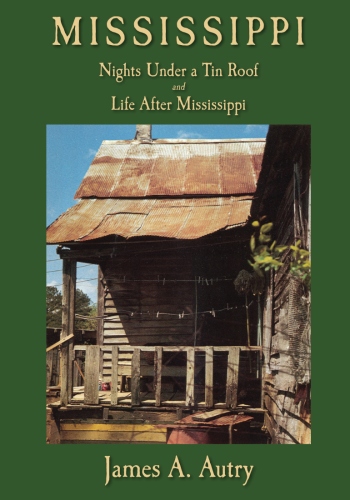 Order Now!
About the Book

It’s rare that a CEO writes poetry recalling lessons learned under a tin roof. James Autry, then president of the Meredith Group magazine publishing division, wrote verse whenever and wherever he could—in board rooms between meetings, in hotel lobbies, on airplanes, in limos and taxis. Poetry would not leave him alone.

In his preface to Mississippi, Autry calls his verse “pieces” of recollections because “their shape comes to me as stories and then as pieces of a larger story.” His poems achieve a remarkably dense texture of memory forming what John Mack Carter has called a bridge of “kinship” between poet and reader.

focuses on the rhythms of rural southern life, an odyssey of country funerals, weddings, church revivals, family reunions, and courtships drawn from a unique American heritage.

Autry’s narrative verse makes us stop and listen to an Air Force air traffic control operator trying to save a pilot’s life, a young man grappling with the social prejudices of his native state, a father trying to understand his autistic son. Autry also knows the deep silences of the wind in the pines, of hot, quiet days in the Mississippi hill country, the sound of one’s own breathing.

The book is illustrated with 66 b & w photographs of the rural south taken by WPA photographers and the author’s step-mother, Lola Mae Autry.

Bill Moyers believes Autry is one of America’s leading contemporary poets and featured him in two PBS specials devoted to American poets. Moyers says of Autry’s verse, “We all need the shelter of the tin roof today against the storms raging in our world.”

James A. Autry is a former CEO of the Meredith Corporation, an American media conglomerate based in Des Moines, Iowa. He graduated from the University of Mississippi and is a winner of the “Silver Em Award,” the journalism school’s award for a distinguished career in journalism. His first published books were books of poetry, Nights Under a Tin Roof and Life After Mississippi. In late 1991, the Kentucky Poetry Review published a special James A. Autry issue. He received considerable national attention when he was one of the poets featured on Bill Moyers’ special series, “The Power of the Word,” on PBS.