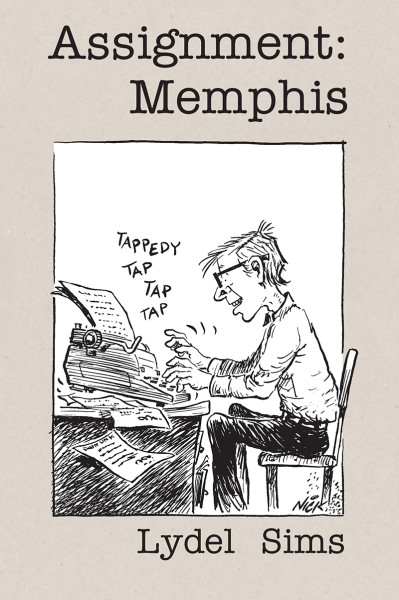 Assignment: Memphis is the first collection of 150 columns by Mid-South humorist Lydel Sims from his popular and entertaining weekly column in The Commercial Appeal. Featuring a new Preface by Pat Sims; Introduction by William Thomas; and cartoons by Charles Nicholas that originally appeared with Sims’ columns. In 1949 Sims began writing his column, "Assignment: Memphis," in which he made fun of “the things that make the rest of us scream.” Fascinated with language and life’s idiosyncrasies, he explored topics such as “Brainwashing Removes the Worry” and “Clothes Encounter of the Worst Kind.” Historian Shelby Foote writes, “I began each day with Lydel Sims in The Commercial Appeal. For those who have not known him up to now, this book is a splendid way to them to begin the rest of their lives.” 274 pages, trade paper, ISBN 9780916242817, $29.95.

Back when I was in junior or senior high school or so, my favorite part of the morning paper’s front page was at the bottom in the middle. It was a daily humor column titled “Assignment: Memphis.”

The column was written by long-time newspaperman Lydel Sims, who was fascinated with language and life’s idiosyncrasies. He went to work as a columnist for Memphis’s Commercial Appeal in 1949, charged with “laughing at things that make the rest of us scream.”

Something of a prodigy, the Shreveport-born Sims graduated from high school at age 14 and from college at 18. Sims worked at newspapers in Nashville and Jackson, Tennessee, before moving to Memphis to work at the Associated Press bureau. It was there that he wrote a feature about the family cat that came to the attention of the Commercial Appeal editor, who offered him a position writing “Assignment: Memphis.”

Sims left the Commercial Appeal twice—once for a stint as postmaster of Memphis and once for a shorter period during which he managed a congressional campaign. He also taught writing courses at Southwestern (now Rhodes College) and at Memphis State University (now the University of Memphis) and wrote for the Memphis Flyer. He was said to read voraciously—up to six books a week.

As for the challenge of coming up with a funny column every day, Sims implemented Sims’ Law: “as the day grows later, my standards grow lower. Things that didn’t look at all good to me at 9 a.m. look wonderful at 11 a.m.”

He wrote on wonderful topics such as “Brainwashing Removes the Worry” and “Clothes Encounter of the Worst Kind.” He wrote about language, the Southern condition, urban legends, human legends – and a hands-on investigation into the theory that a mule will not bray if its tail is tied down (results inconclusive).

Today, he would be a blogger. His writing, curiosity and tongue-in-cheek observations should be textbook lessons to all of us scribes.

“As I descend into senectitude, I have had to eliminate from my breakfast successively bacon, eggs, and even grits if accompanied by fat gravy or butter than which no grits is edible without. But I have stubbornly clung to Lydel Sims for morning fare, rich though it be. During his weekend and vacation absences, I find my self holding my breath till his return¾thus making him the only modern writer whose performance is breathtaking even when his typewriter stands mute.”
Bern Keating

“Lydel Sims’ insights into all those little events which rarely make it into the realm of hard news but which, in fact, make up the stuff of every day life have inspired and entertained millions of readers over the years. I was one of the first of those readers, and I will testify that his work never fails to give something precious for a small investment of reading time.”
James a Autry