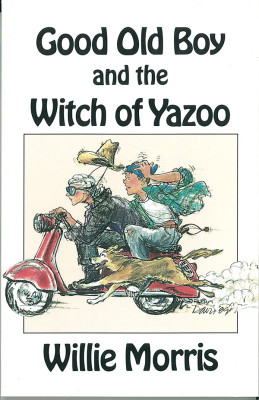 The sequel to GOOD OLD BOY; Willie's adventures continue after WWII when the town of Yazoo is gripped by rumors of witchcraft. Juvenile fiction, trade paper.

GOOD OLD BOY AND THE WITCH OF YAZOO  is a sequel to Willie Morris’s classic novel GOOD OLD BOY. In this sequel, Willie is a year older and takes his girlfriend, Rivers Applewhite, to the high school prom. He befriends Miss Eddie Mack, the aging granddaughter of the original “Witch of Yazoo” who famously threatened to return from the dead and burn down the town. Yazoo City, which was destroyed by a 1904 fire, a chain was put over the witch’s grave (though mostly in fun, it became an instant tourist attraction). Eddie Mack has been accused of organizing a coven of witches and hysteria grips Yazoo City. Vowing to investigate, Willie as usual gets himself and his friends in trouble. (ISBN 0-916242-67-6, $10.95, trade paper)
“Good Old Boy and the Witch of Yazoo” continues the adventures of the group of kids (and a dog) whom Willie Morris introduced in his “Good Old Boy.” The author, a Yazoo native and former editor of Harper’s who returned to live in Mississippi a decade ago, takes up the story a year later, when everyone is a little older and Rivers Applewhite, “the prettiest girl in Mississippi,” just a little prettier. World War II is over; the boys feel they ought to be happy just to be alive, but there’s still not much happening in Yazoo unless they stir up trouble.

Trouble presents itself in the form of a bucket of blood overflowing at the slaughterhouse. Ringleader Willie hits on the idea of painting witches’ signs on the deserted Clark mansion. This the boys do, and, swearing each other to secrecy, go home to await the uproar. Lest the uproar should be too slow in coming, however, they helpfully place anonymous phone calls, alerting the most notorious gossips in Yazoo to the mysterious signs in blood.

Trouble has a way of getting out of hand, and Yazoo takes up the cry of “witch!” as enthusiastically as any community. There is, of course, a prime suspect, the great-granddaughter of Yazoo’s last witch. Moreover, the boys are stunned to see more signs appear in town–has their mischief really placed them in league with the forces of evil? Willie Morris’ sly psychology, uproarious dialogue and lyrical descriptions of Mississippi life make “The Witch of Yazoo” a book to read aloud, preferably to one’s children.