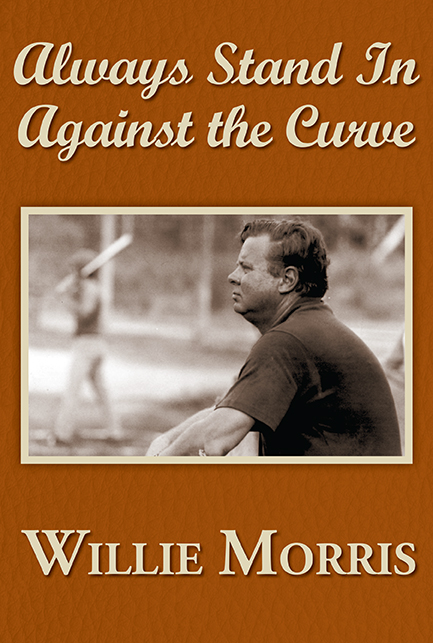 Yoknapatawpha Press is pleased to announce the release of a paperback edition of Willie Morris’s collection of sports stories, Always Stand In Against the Curve, which we originally published in hardcover in 1983. Illustrated with 28 photos from the 1950-52 Yazoo City High School yearbooks. ISBN 9780916242824. $15.95.

Always Stand In Against The Curve, is a book for those of us lucky enough to have shot baskets under a goal over a garage door or shagged fly balls in open fields until it was too dark to see the hoop or the baseball against the sky. Each of the six autobiographical essays represent chapters of a Great American boyhood, beginning with Morris’s tributes to high school baseball and basketball teammates and coaches, a road trip to Notre Dame with “Bevo,” the University of Texas longhorn steer; Rhodes scholars playing basketball in England; a writers-and-artists softball game in East Hampton, New York, in which the author hit a home run only to break his ankle; and finally Morris’ journey to Austin, Texas, in search of the past. The novella, “The Fumble,” is a sports classic about high school football in Mississippi, an epic gridiron battle between Yazoo High School and the heavily favored Central High Tigers of Jackson.To Morris, sports are a gentle center in the eye of the storm where student athletes work out the bruises of living, learn about winning and losing, and find a way to face the world.

The tales that Morris spins in Always Stand In Against the Curve parallel his own growth and development beginning with his schoolboy days in Mississippi, continuing to his college days at the University of Texas (where he was editor of The Daily Texan), extending to Europe with his receipt of a Rhodes scholarship. The longest piece of the collection, “The fumble,” is a certifiable minor masterpiece. It is Morris’s finest effort in the volume and an unusually valuable piece of 1950s Americana in its own right. It re-creates the magnified traumas and triumphs of high school football in the south….Along with a heartbreakingly predictable athletic drama, the story finally examines the sense of community that turns whole southern towns into single-minded, crêpe paper-draped booster organizations….a macroscopic view of one of the most endearing social rituals of the south. Morris’s sure narrative touch lends a poignant and personalized nature very rare to modern writing.

From boyhood to middle-age, in places as far apart as Oxford, England, and Austin, Texas, Morris has enjoyed adventures as athlete and fan. Charm and mischief mark the best stories, as when Morris tells of driving his college mascot, the University of Texas longhorn steer all the way to a football game at Notre Dame….All the pieces are deeply felt, and some evoke the dreamlike playing fields of Morris’s youth.